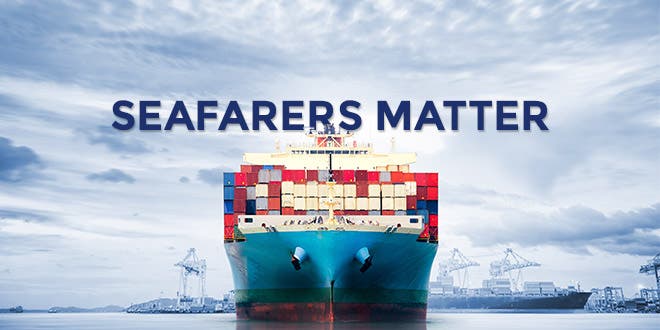 GRACE Hopper once said, “A ship in port is safe but that is not what ships are built for.” It means a ship must constantly navigate through the sea to meet the purpose she was built for. The ship is built to move a large number of goods across the globe, and findings have emerged that without shipping the world would not have been as connected as it is currently.

The most important thought that comes to mind when the keel for a ship is about to be laid is the crew that would man the ship. This is because the crew is the ones who would ensure the ship sails through all kinds of weather. In fact, they weather the storms together and it is through their expertise that the ship maneuvers through everything it experiences. Sadly, these seafarers sometimes lose their lives in a bid to make the world more enjoyable.

Though people in maritime know that the most important asset in shipping is the human element, the world never really felt how important this set of professionals was until the outbreak of COVID-19 across the globe. The world was not prepared for the outbreak of the pandemic, so many countries decided to shut all businesses. Flights were grounded and a lot of industries were seen as not essential. But the shipping chain remained, albeit with a lot of regulations, to contribute its own quota to efforts to mitigate the spread of the pandemic.

June 25 every year is the Day of The Seafarer, DoTS, the day set aside by the International Maritime Organisation, IMO, to recognize the invaluable contribution seafarers make to international trade and the world economy, often at a great personal cost to themselves and their families.

DoTS was first celebrated in 2011, following its establishment by a resolution adopted by parties to the International Convention on Standards of Training, Certification, and Watchkeeping for Seafarers, STCW, during their conference in Manila, Philippines, in June 2010. The conference adopted major revisions to the Convention and Code.

Technically, this year’s edition is the 10th anniversary of the celebration, and IMO has chosen for it the theme, “Seafarers are Key Workers.” According to the specialized agency of the United Nations in charge of shipping regulation, seafarers are on the frontline of the COVID-19 pandemic, playing an essential role in maintaining the flow of vital goods, such as food, medicines, and medical supplies.

However, the crisis has led to difficult working conditions for seafarers, including uncertainties and difficulties about port access, re-supply, crew changeovers, and repatriation.

Who does not know how important these people are. Should they not be celebrated alongside the health workers, as the MVPs of this generation? Without the majority of the drugs and food, supplies would not even reach their destination. It is important to note that majority of the economies would have been shut down but for shipping because the world did not prepare for the effect of the pandemic.

IMO Secretary-General Kitack Lim recently issued a moving personal message to seafarers everywhere, assuring them that IMO understands the unique problems they face during the coronavirus pandemic and has been working tirelessly at all levels to find solutions to them. The message, tagged “you are not alone”, also highlighted the fact that a lot of seafarers face the challenges of repatriation to their home countries and bases during the pandemic because of travel restrictions, which also made crew change extremely difficult.

It is important to note that back home, the period of COVID-19 also coincided with the appointment of Dr. Bashir Jamoh as Director-General of the Nigerian Maritime Administration and Safety Agency (NIMASA) by President Muhammadu Buhari. What else could test a budding administration than a pandemic like this? However, the handling of the pandemic by the NIMASA DG has revealed that he is the round peg in the round hole.

Jamoh has continuously issued guidelines on seafarers’ welfare. They include that on the extension of their certificates and other trading certificates, which would ensure that their jobs are not put in jeopardy.

Under Jamoh’s watch during the pandemic, the maritime administration has also issued guidelines for crew change and informed the relevant authorities that seafarers are essential workers, who should be allowed free movement, as they are the ones that keep the economy going.

Truly, seafarers are key workers, and they must be celebrated on June 25, either virtually or by the selection of a few people in a hall to honor these great people. We must celebrate them!