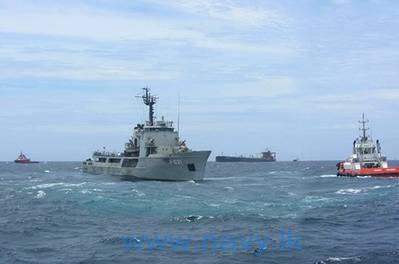 Sri Lanka has initiated repair work on the ruptured fuel oil tank in the engine room of a stricken fully loaded oil supertanker after plugging the leak, the country’s Navy said.

“Salvors are on board, they plugged the leak and the repair is still going…They have vacated the ruptured tank and transferred the dirty water into the ballast section,” de Silva told Reuters.

A fire broke out in the engine room of the Greek-owned New Diamond tanker on Sept. 3. The ship had left long trails of marine oil slicks. He said the Sri Lankan Navy and Indian Coast Guard divers on Sunday inspected the vessels and surrounding area for any further leak.

A team of officials from Sri Lanka’s Marine Environment Protection Authority (MEPA) visited the tanker on Monday to inspect and collect samples of marine fuel oil from the vessel loaded with about 2 million barrels of oil.

MEPA has said it plans to take action against the ship’s owner under the country’s laws to protect the marine ecosystem. Indian Oil Corp, which has chartered the ship to import oil to Paradip in eastern India from Kuwait, is waiting for a salvagers’ report expected within a week, its chairman S.M. Vaidya said.

“De Silva said seven tug boats were engaged to keep a vigil on the vessel and provide support to the salvagers carrying out the repair work. New Shipping Ltd, the manager of the Panama-flagged New Diamond, has appointed SMIT Singapore Pte Ltd to lead salvage operations.