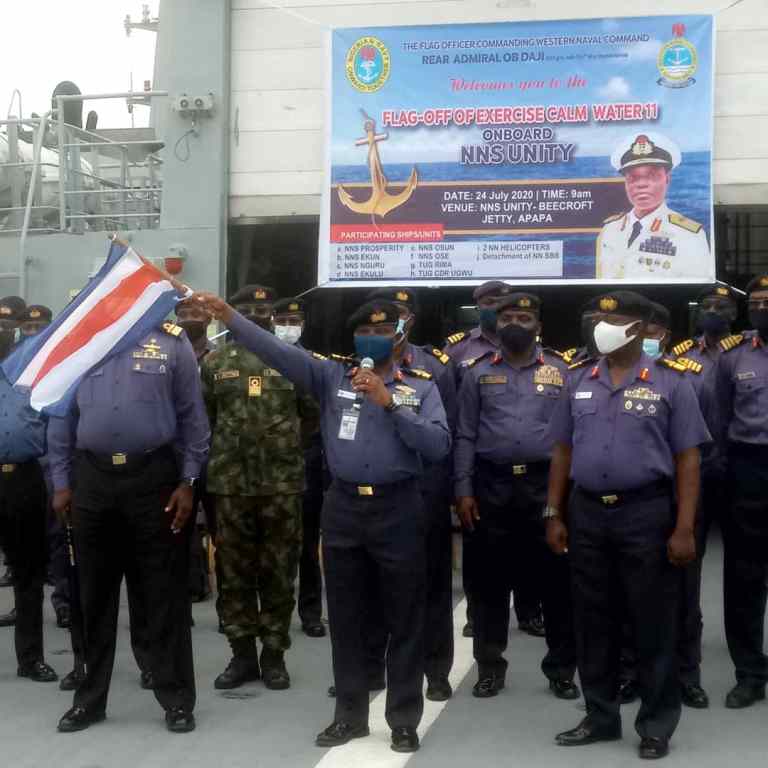 The Western Naval Command of the Nigerian Navy has flagged off Exercise Okun Alafia II, a Yoruba word for Calm Water, to address insecurity in the maritime environment within its Area of Responsibility, spanning from Lagos up to 200 nautical miles of the nation’s Exclusive Economic

Speaking during the flag-off of the exercise, onboard NNS UNITY, at the Beecroft Jetty, Apapa, Lagos, Flag Officer Commanding, FOC Western Naval Command, Rear Admiral Oladele Daji, explained that the exercise was in continuation of similar ongoing exercises embarked upon by the command, adding that same exercise were simultaneously launched at the Central and Eastern commands of the Navy.

He said: “ In the course of carrying out our statutory responsibility of protecting Nigeria’s maritime domain from the western flank, the command engaged in series of exercises and operations of this nature in the past, which included: Operation Junction Rain, Exercise Swift Response, Exercise Ategun Alafia, Exercise Okun Alafia 1, and Treasure Guard II.

“These series of exercises and operations resulted in several arrest and handover of suspects and platforms used in committing illegalities by criminals, to relevant law enforcement agencies for prosecution.

“ The essence of Operation Okun Alafia II is in furtherance of the strategic directive and mission of the Chief of the Naval Staff, Vice Admiral Ibok Ete- Ibas, which is to develop a naval force that is well trained, organized and highly motivated to discharge its constitutional roles professionally and efficiently for the defence of Nigeria, in ensuring her economic prosperity.

“The purpose of Okun Alafia II is in three folds: to consolidate on the gains of the previous operations; to have a handshake with the three operational commands at sea so that criminals crossing from the west to the central, or from the east to central, do not have a lean way to do that.

“Thirdly, by also carrying out an operation in our backwaters to ensure that criminals already at sea do not have free opportunity to terrorise people in the backwaters”.

Noting that every activity that occurred at sea affects what would have been benefited on land, he disclosed that the exercise would also cover the creeks, channels and adjourning land areas, where Operational Bases and the Forward Operational Bases would conduct clearance operations by taking the battle to criminal hideouts.

“ He further explained that “ For Exercise Okun Alafia II, at the first instance, it is a 30-day long operation. It could be renewed by the naval headquarters depending on its outcome.

Reiterating the commitment of the Nigerian Navy in general and the Western Naval Command in particular, to provide the required conducive environment for legitimate businesses to thrive both at sea and the nation’s vast waterways, he called on members of the public avail naval formations within their localities, information that would help rid the nation of all forms of criminalities.

After the flag-off, the ships, helicopters and detachment of the SBS deplored for the exercise, carried out evolutions such as Visit Board Search and Seizure, (VBSS- Opposed Boarding), Fleet Maneuvers, Communication Drills, Medical Evacuation (MEDEVA), Lowering and Recovery of Boat.